An “islamic terrorist” attack has left 3 casualties and more than 20 victims wounded on Westminster Bridge in London with at least one assailant shot by police just a while ago.

A spokesman for the Metropolitan Police said a “full counter terrorism investigation” was under way. “We received a number of different reports, which included a person in the river, a car in collision with pedestrians, and a man armed with a knife,” Commander BJ Harrington told reporters.

The London Ambulance Service said it treated at least 10 patients on Westminster Bridge, including one woman who had been pulled alive from the River Thames.

Harrington said the attack left “a number of casualties, including police officers“, but did not confirm specific figures.

The UK Press Association, quoting an unnamed doctor, reported at least one woman was killed and other victims had “catastrophic” injuries.

Many people were lying on the ground – some bleeding heavily and apparently unconscious – on Westminster Bridge near Britain’s parliament. “The alleged assailant was shot by armed police, an ambulance is currently attending the scene to remove the casualties,” House of Commons Leader David Lidington said.

It wasn’t clear if the attacker acted alone, or if he was dead or alive.

Witnesses reported multiple attacks near parliament. One said he saw a car heading south to north mowing people down on the bridge. “We saw a black vehicle at full speed and it ran down a number of people. I could see a lot of people flying,” tourist Babi Nagy told Al Jazeera. “Immediately it came to mind that this was a terrorist attack.”

Polish politician and journalist Radoslaw Sikorski posted a video on Twitter of the aftermath on the bridge, showing several injured people lying on the ground.

A car on Westminster Bridge has just mowed down at least 5 people. pic.twitter.com/tdCR9I0NgJ

Another witness said he saw victims scattered along the street. “As I was walking up the steps, there was a man who had fallen and medics were taking care of him. There was a lady who was also stabbed or shot. There was a lot of blood,” Martin Pearce, visibly shaken, told Al Jazeera at the scene.

Britain’s Prime Minister Theresa May will chair a meeting of the government emergency committee to discuss London attack. 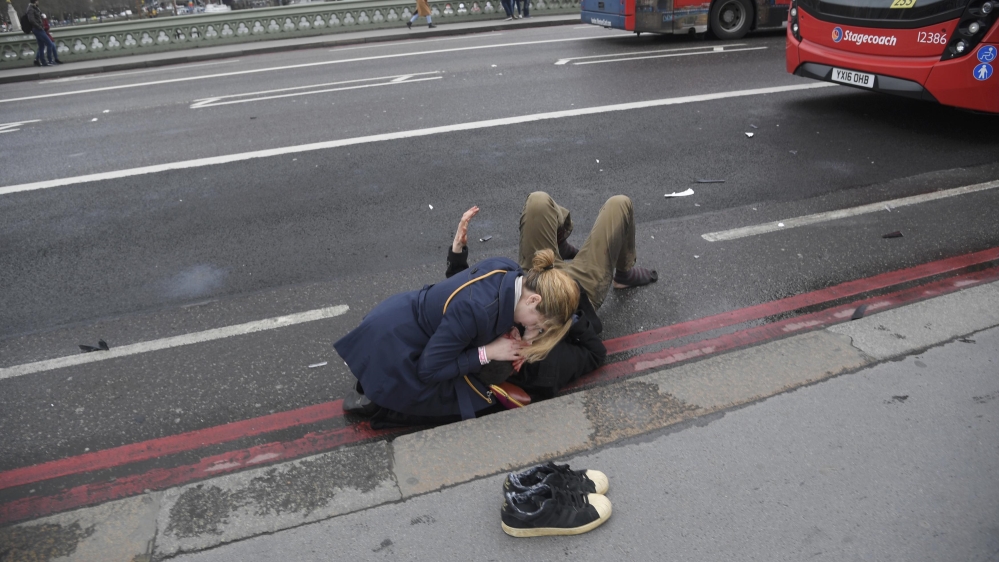