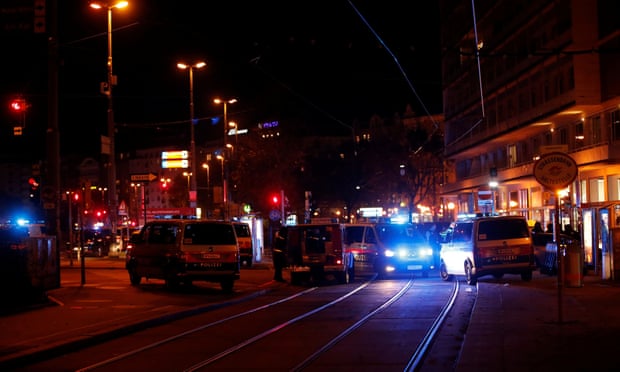 Police in Vienna were hunting for a group of “heavily armed and dangerous” gunmen on Monday night after a string of shootings described by the Austrian chancellor, Sebastian Kurz, as a “repulsive terror attack”.

Two people, one of them an attacker, were killed in exchanges of gunfire in the centre of the Austrian capital.

And 15 others – including at least one police officer – were seriously injured in exchanges of gunfire. Seven victims were reported to be in critical condition. “We have become victims of a repulsive terror attack in the capital that is ongoing,” Kurz said in a press conference. “We are currently experiencing difficult hours in our republic. I would like to thank all the emergency forces who are risking their lives for our safety, especially today. Our police will take decisive action against the perpetrators of this repulsive terrorist attack.”

Kurz said the army would protect sites in the capital so the police could focus on anti-terror operations. Speaking to the Austrian broadcaster ORF, he said the attackers “were very well equipped with automatic weapons” and had “prepared professionally”.

One attacker was shot dead by police. According to government sources, the slain terrorist was carrying an explosive belt and a bag filled with ammunition, ORF reported.

But several other gunmen were still on the loose on Monday night, and Karl Nehammer, the interior minister, said they were “heavily armed and dangerous”.

Frequent sirens and helicopters could be heard in the city centre and large numbers of police were guarding an area near the city’s world-famous opera house. “We have brought several special forces units together that are now searching for the presumed terrorists. I am therefore not limiting it to an area of Vienna because these are mobile perpetrators,” Nehammer told ORF, urging the public to stay indoors until the all-clear was given. “We believe there are several perpetrators. Unfortunately there are also several injured, probably also dead,” he said.

The attack began just hours before Austria was due to introduce new coronavirus restrictions, including a curfew from midnight to 6am, and bars and restaurants in the network of narrow streets known to locals as the “Bermuda triangle” were packed.

Shooting first broke out at around 8pm on Seitenstettengasse street in the centre of the city but spread out to what police said were six different shooting locations in the vicinity.

A witness said a gunman had started to fire at random at groups of people sitting at tables. Footage purportedly showing the attack and shared by European counter-terrorism officers showed a puddle of blood by the entrance of a restaurant.

Another unconfirmed clip showed a man carrying a rifle and wearing a white shirt and beige trousers firing shots towards a building. A male voice can be heard shouting “Asshole, motherfucker” at the attacker from one of the buildings.

Police repeatedly appealed for witnesses to refrain from sharing photographs or video from the scene after footage which appeared to show an injured policeman was briefly posted on Twitter.

Initial reports had suggested that the nearby Stadttempel synagogue could have been the target of the attack.

But Oskar Deutsch, president of the Jewish Community Vienna, said the synagogue on Seitenstettengasse and the office building at the same address were already closed at the time of the attack, and it was “unclear” if it was one of the targets of the attack.

Deutsch told the Kurier newspaper that no members of Vienna’s Jewish community were among those injured in the attack.

Citing an interview with a rabbi living directly above the synagogue, Kurier reported an attacker had taken random shots at people sitting outside cafes and bars on Judengasse and Seitenstettengasse in central Vienna. “He did not aim at the Stadttempel [synagogue],” the witness said.

The synagogue was the target of a terror attack almost four decades ago. On 29 August 1981, two members of the Palestinian group Fatah – The Revolutionary Council, also known as ANO – tried to storm the synagogue building but were stopped by security forces. Two people were killed and 21 others injured in the attack.

More recently, however, Austria had been spared the sort of major attacks that have hit other European countries.

The French president, Emmanuel Macron, tweeted that “we French share the shock and sorrow of the Austrian people”.

“After France, it’s a friendly nation that has been attacked,” he added, referring to the killing on Thursday of three people by a knife-armed attacker in Nice and the beheading of a schoolteacher by a suspected Islamist outside Paris several days before.

Boris Johnson tweeted: “I am deeply shocked by the terrible attacks in Vienna tonight. The UK’s thoughts are with the people of Austria – we stand united with you against terror.”

Italian prime minister Giuseppe Conte said there was “no room for hatred and violence in our common European home”, while his foreign minister Luigi Di Maio, tweeted that “Europe must react”.