On 22 January 2018, after a random search operation undertaken by the army in the Orachari village, in the Chittagong Hill Tracts region (CHT) of Bangladesh, two men from the army entered the house of an indigenous Marma family, holding them at gunpoint while their two daughters were sexually assaulted. Aged 19, the elder sister was admitted at the Rangamati General Hospital in a critical condition along with her 15-year-old sister, who also suffered sexual harassment. After the incident, the two sisters were kept in the hospital with restricted visits from family and supporters, while under strong surveillance from a police team. Afraid of being threatened by the army and of putting their family in risk, the victims tried to oppose their release into their family’s custody. On 15 February, the Chakma Queen, Rani Yan Yan, visited the hospital along with other human rights volunteers to try to intervene to protect the girls, but after the volunteers were forced out of the office, it was reported that police officers physically assaulted Queen (“Rani”) YanYan. Against the victims’ wishes of being released into the Chakma Queen’s custody, they are now being held with their family. 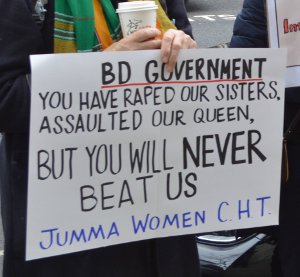 A case that has prompted many questions for the frequent missing of information as well as indications of threat and oppression against people who testified the assault, it was hardly a rare incident. Although having reached the international media by surpassing the common lack of evidences and reporting, the repercussion the Marma Sister’s story had by the time it happened sadly does not indicate that changes are about to happen. Cases of human rights violations and sexual harassment of indigenous women are sadly common in the CHT region, being often used as a tool to strengthen the occupation of indigenous ancestral lands through the spread of terror. In fact, as informed by UNPO’s member in the CHT region, a series of sexual violence cases continue on happening, as reflected in the following incidents allegedly committed by muslim Bengali settlers: 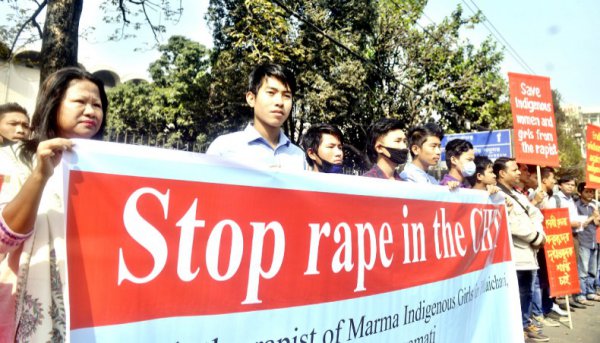 On 18 May 2018 two Tripura girls were killed after being raped in Sitakunda;

On 21 June 2018 a Tripura girl was gang raped in Khagrachari;

On 29 July 2018 a Tripura girl (Kartika Tripura) was killed after being raped in Dighinala;

On 05 August 2018 a Chakma girl with speech impairment was raped in Longadu;

On 06 August 2018 an attempted rape took place against a Tripura woman in Matiranga;

On 07 August 2018 an attempted rape took place against a Chakma woman in Baghaichari.

As those who commit the attacks hardly, if ever, come to face the consequences of their acts, new cases are inclined to continue on happening, with no prospect of justice for the victims. As mentioned at the UN Headquarters on the occasion of the celebration of the International Day of Indigenous Peoples, which took place on 9 August 2018, along with multiple cases of displacement and other kinds of human-inflicted violence, as torture and abuse, sexual harassment has influenced the migration of indigenous peoples from the CHT to other regions in Bangladesh and in neighbouring countries. In this matter, the national government has still been unable to agree on a definition of an internally displaced person (IDP) and of who qualifies for this status. Consequently, when resorting to migration as a way to escape the oppression and violence that they suffer in their homelands, many indigenous families find themselves living in camps with no prospect of regaining ownership over the land they fled, currently mainly occupied by muslim Bengali settlers or military personnel. This limitation further deprives them of the possibility of receiving adequate support from international bodies.

Eight months after their assault, the Marma sisters continue to live confined in a house along with the rest of their family, under strict police surveillance. UNPO urges the authorities in Bangladesh to take on efforts to put an end to the use of sexual violence against indigenous women, as well as to the frustration victims endure for the lack of proper accountability for the assailants. If impunity and military control of the media continue to allow sexual offenders to walk free, justice and respect are unlikely to replace violence and oppression against indigenous peoples in the Chittagong Hill Tracts.