At 74, she is probably the oldest woman exponent of Kalaripayattu, the ancient martial arts from Kerala. 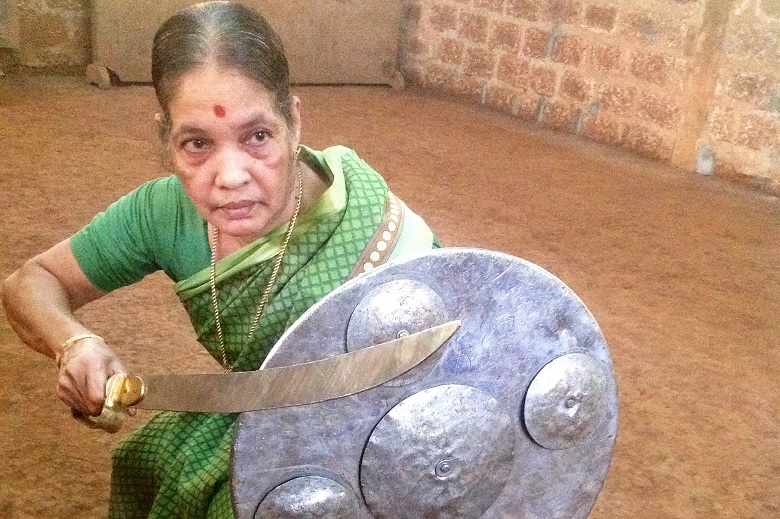 Meenakshi Gurukkal crouched low, sword poised; her eyes unblinking as she faced her opponent in the mud-paved ‘kalari’ or arena. From the tree tops, a mynah’s call resonated in the silence. In a flash she moved to attack, twirling her sword; metal clashing loudly as it made contact with a shield.

At 74, she is possibly the oldest woman exponent of Kalaripayattu, the ancient sword martial arts from Kerala. She has been practising Kalaripayattu for no less than sixty-eight years – training and teaching.

Around 150 students learn Kalaripayattu in her school Kadathanadan Kalari Sangam, in a tiny hamlet in Vadakara, near Calicut, Kerala. From June to September every year, classes are held thrice a day teaching the Northern style of Kalaripayattu, including “uzhichil” or massages for aches and pains. Techniques have been passed down through generations, written in a palm ‘booklet’, grey and delicate with age. When school term is over, Meenakshi takes part in performances. “Nowadays, apart from teaching, I practise only when I have a show,” she says nonchalantly. This, from someone who on an average performs in 60 shows a year.

More than a third of the students are girls, aged between six and twenty six. Meenakshi’s school welcomes children from all walks of life. “Gender and community are totally irrelevant. What matters is age. The earlier you start, the more proficient you are,” she explains.

The school runs on a ‘no fees’ principle. At the end of each year, students give her whatever guru dakshina they chose to. Today, some of her students are now Gurukkals or masters themselves.

The kalari walls display weapons – fist daggers, shields, spears, thick wooden rods, tusk-shaped ‘ottas’ and ‘urumis’ – long flexible blades used in combat. Among them is a shield, polished, but old with use – one that Meenakshi herself had trained with as a young girl.

She started learning Kalaripayattu at the age of six, when her father had taken her and her sister to a local kalari. “There were only a handful of girls in our class. But my father wasn’t bothered. He was determined we learn Kalaripayattu,” she says.

Meenakshi turned out to be naturally gifted, and her father encouraged her to continue training even past puberty, when girls normally stopped. 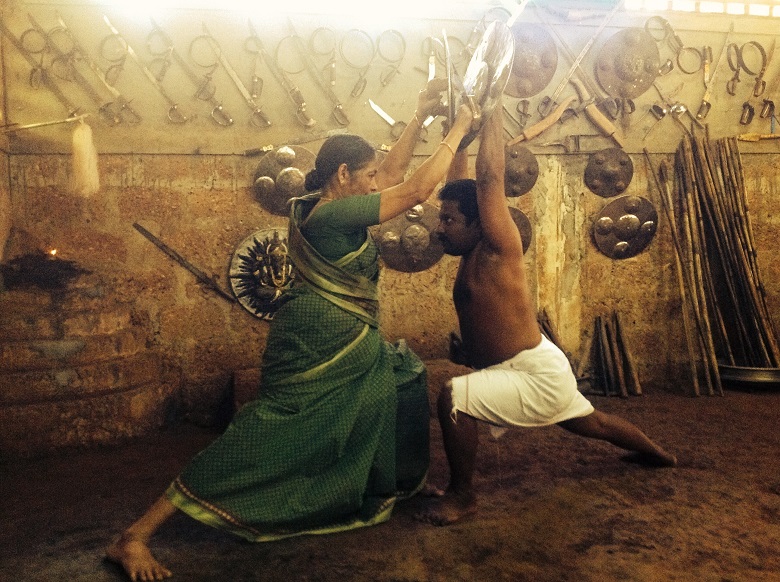 It was then that she met and married Raghavan Master, a school teacher with a passion for Kalaripayattu. Shunned from joining a local kalari because he was from the backward Thiyya/Ezhava community, Raghavan Master had built his own Kalaripayattu training school in defiance. Kadathanadan Kalari Sangam was set up in 1949; a place where anyone and everyone who had a passion for the martial art could join. “His goal was to make Kalaripayattu accessible to everyone. Today we have done that,” explained Meenakshi, who started teaching Kalaripayattu at his training school at age 17.

Oral folklore in north Kerala, known as Vadakkan Pattu or Northern Ballads, is rich with tales of Kalaripayattu champions. Among them are the Thiyya/Ezhava warriors of Puthooram tharavad in North Malabar- heroes and heroines such as Aromal Chekavar, an expert in ‘ankam’ (duelling) and Unniarcha, a women skilled in ‘urumi’ combat who singlehandedly took on vagabonds to ensure safe passage for women in that area. Ironically, Raghavan Master, from the same Thiyya/Ezhava community, had to fight discrimination in the late 1940s and set up a separate kalari to train and teach.

Historians stress that Kalaripayattu was popular in medieval Kerala. “Each ‘desam’ or locality had a kalari or gymnasium with a guru at its head and both boys and girls received physical training in it,” noted historian Prof A Sreedhara Menon in his work ‘A Survey of Kerala History’.

Portuguese traveller Duarte Barbosa, wrote of how he saw Kalaripayattu students in North Kerala in the early 1500s, who “…Learn twice a day as long as they are children… and they become so loose jointed and supple that they make them turn their bodies contrary to nature..” (exerpt from The Book of Duarte Barbosa, Volume II, Duarte Barbosa)

Mythology credits Parasurama being the father of Kalaripayattu having learnt in from Shiva himself. Historically, it finds mention in early Sangam literature. Kerala historian, Elamkulam Kunjan Pillai, in his book Studies in Kerala History, opined that the northern form Kalaripayattu practised today came into existence in 11 th century, in the wake of the strife between the Tamil Kingdoms of Cheras and Cholas. 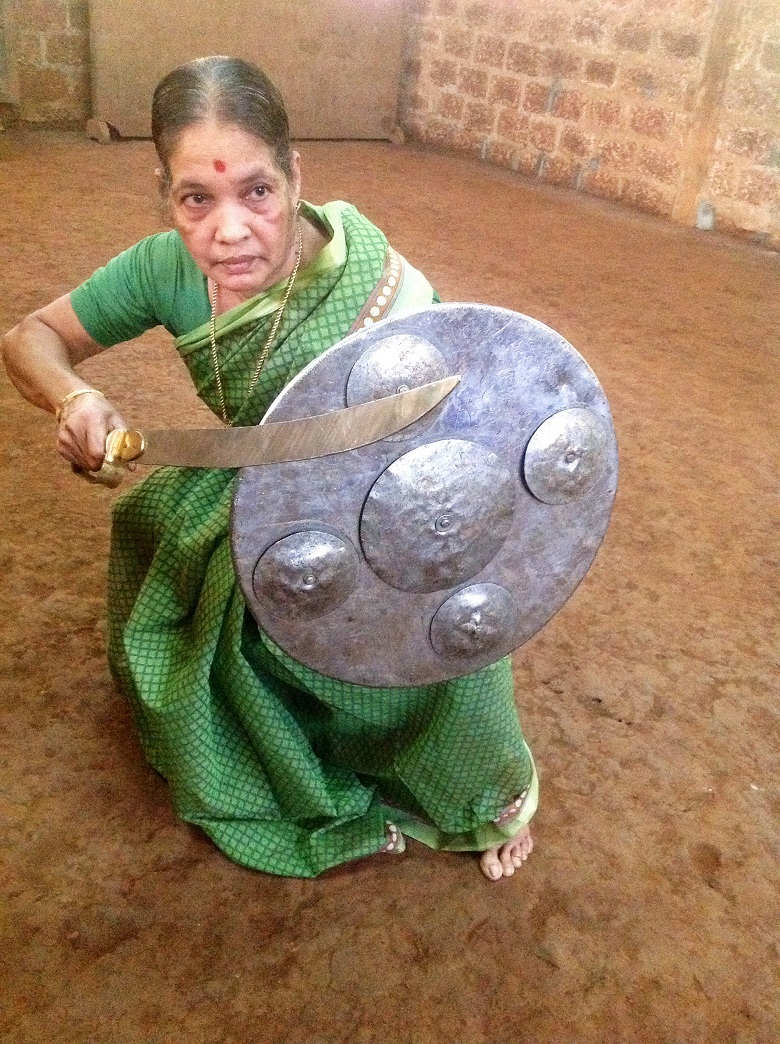 Later, colonial rulers were quick to ensure that locals did not pose a threat to them, and strongly discouraged Kalaripayattu. Their prudish sensibilities also prevented women from learning such skills. Prof Menon noted that after the 17 th century, interest in Kalaripayattu declined.

Restrictions on carrying arms ensured that most Kalaripayattu weapons were kept in cold storage. Kalaripayattu was revived in the 1920s, but practitioners had to ask authorities for special licences to use weapons.

“It was well past Independence that things really picked up. Now it’s a way of life for us,” says Meenakshi. Her children, two sons and two daughters, also started training in Kalaripayattu at six, and today her son Sajeev is a Gurukkal.  “I will practise Kalaripayattu for as long as I physically can,” she adds.

This grand dame of Kalaripayattu is determined to prove the cliché that age is just a number.