“You are an old lunatic”

“And you are short and fat”

This is the most sublime stage of the diplomatic dialogue between USA and North Korea that could decide the future of Planet Earth. 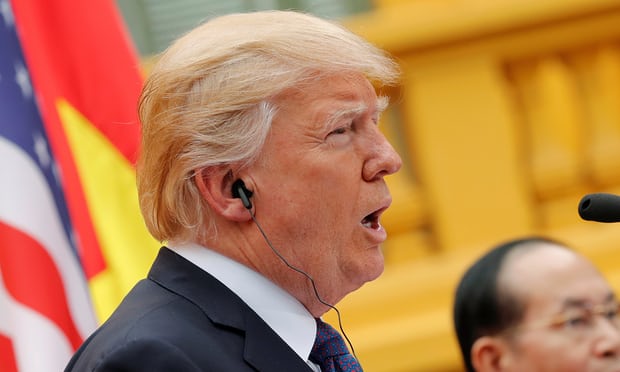 Despite my repeated suggestions to ask the help of Senator Razzi to definitively resolve the Korean crisis, Trump prefers to carry the diplomatic line in his own way.

The US president, Donald Trump, said in a tweet on Sunday that North Korean leader Kim Jong-un had insulted him by calling him “old” and said he would never call Kim “short and fat”.

Why would Kim Jong-un insult me by calling me "old," when I would NEVER call him "short and fat?" Oh well, I try so hard to be his friend – and maybe someday that will happen!

In one of a series of tweets after attending the Asia-Pacific Economic Cooperation summit in Vietnam, Trump said: “Why would Kim Jong-un insult me by calling me ‘old,’ when I would NEVER call him ‘short and fat?’ Oh well, I try so hard to be his friend – and maybe someday that will happen!”

Trump has been working to rally global pressure against North Korea’s nuclear weapons program on the trip to Asia. In a stern speech delivered in South Korea’s National Assembly on Tuesday, he said: “Do not underestimate us. And do not try us … The weapons you’re acquiring are not making you safer, they are putting your regime in grave danger. Every step you take down this dark path increases the peril you face.” 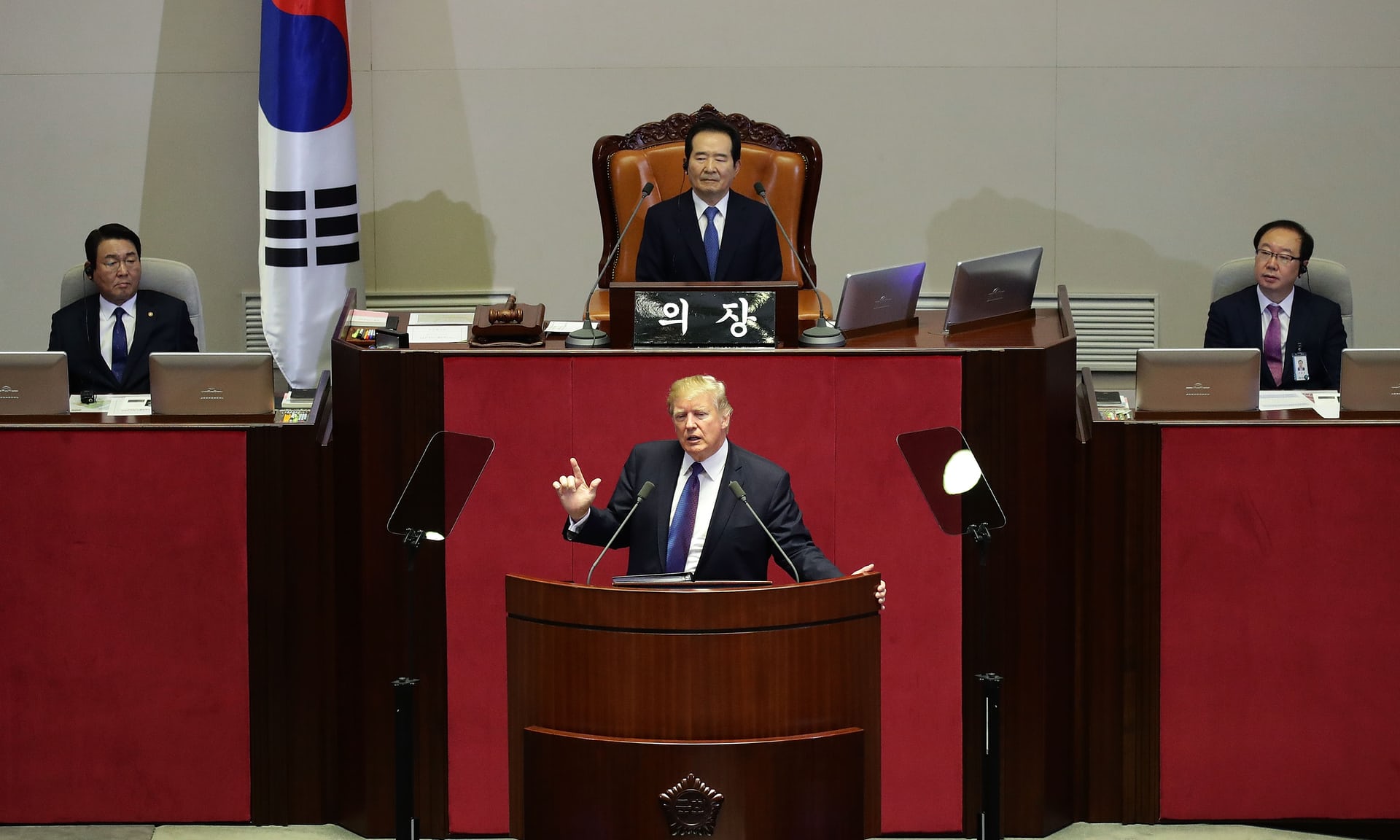 On Saturday, the North’s Foreign Ministry responded in a statement: “Reckless remarks by an old lunatic like Trump will never scare us or stop our advance. On the contrary, all this makes us more sure that our choice to promote economic construction at the same time as building up our nuclear force is all the more righteous, and it pushes us to speed up the effort to complete our nuclear force.”

At a news conference in Vietnam on Sunday after his tweets, Trump said it was possible he could be friends with Kim one day and that it would be “very, very nice” but he was not sure that it would happen.

Asked if he could see himself being friends with Kim, Trump said: “That might be a strange thing to happen but it’s a possibility. If it did happen it could be a good thing, I can tell you, for North Korea, but it could also be good for a lot of other places and be good for the rest the world. It could be something that could happen. I don’t know if it will but it would be very, very nice.”

Trump has traded insults and threats with Kim in the past amid escalating tensions over Pyongyang’s nuclear and missile programs. North Korea conducted its sixth and most powerful nuclear bomb test on September 3, prompting another round of UN sanctions.

In the series of tweets Trump also said the Chinese president, Xi Jinping, was “upping sanctions” on North Korea in response to its nuclear and missile programs and that Xi wants Pyongyang to “denuclearize”.

During Trump’s visit to Beijing last week, Xi reiterated that China would strive for the denuclearisation of the Korean peninsula but offered no hint that China would change tack on North Korea, with which it fought side by side in the 1950-53 Korean war against US-led forces. 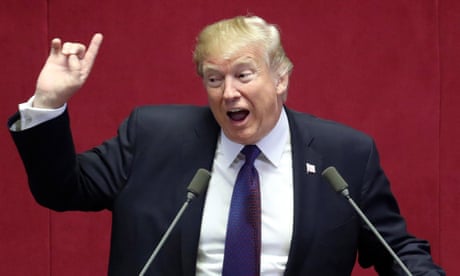 While in Vietnam on Sunday, Trump also said he was prepared to mediate between claimants to the South China Sea, where five countries contest China’s sweeping claims to the busy waterway.

Vietnam has become the most vocal opponent of China’s claims and its construction and militarisation of artificial islands in the sea, through which about $3t in goods pass each year. “If I can help mediate or arbitrate, please let me know,” Trump said in comments at the start of a meeting in Hanoi with Vietnam’s president, Tran Dai Quang.

Trump acknowledged that China’s position on the South China Sea was a problem. “I’m a very good mediator and arbitrator,” he said.

Vietnam has also reclaimed land around reefs and islets but on nowhere near the same scale as China. Brunei, Malaysia, the Philippines and Taiwan also have claims in the sea. China has built seven artificial islands in disputed waters, three of them equipped with runways, surface-to-air missiles and radars. 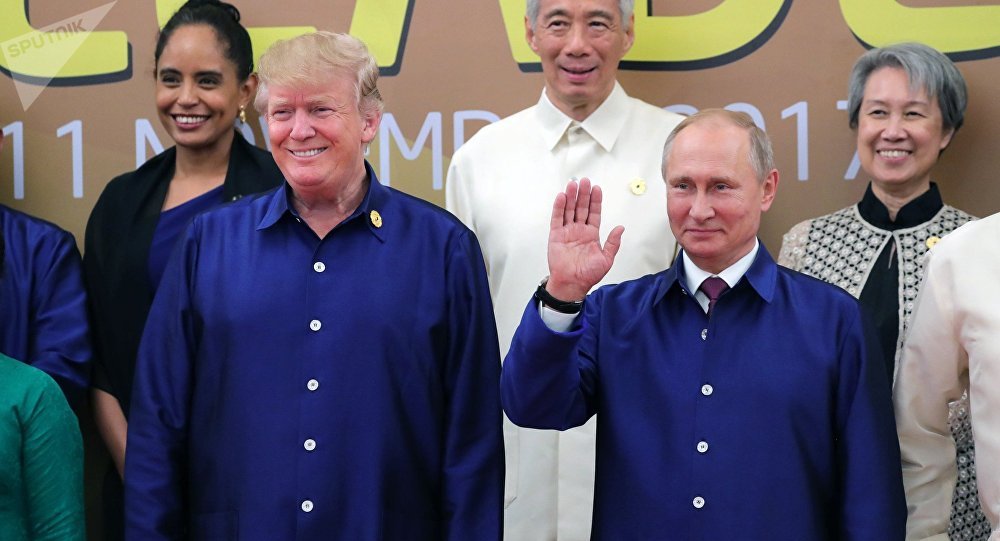 The South China Sea was discussed in Beijing on an earlier leg of Trump’s 12-day Asian tour and the US secretary of state, Rex Tillerson, said the United States and China had a frank exchange of views. The United States has angered China with freedom of navigation patrols close to Chinese-controlled islands, which have been continued by the Trump administration.

In August, foreign ministers of south-east Asia and China adopted a negotiating framework for a code of conduct in the South China Sea. The framework will be endorsed by China and members of the Association of Southeast (sic) Asian Nations at a summit in Manila on Monday.